This week we tried something new: mind maps. I was amazed when, after only watching this short introduction to mind maps, I woke up the next morning still able to see the two sample mind maps when I closed my eyes. I could therefore remember all the French phrases on that sample mind map--and I wasn't even trying to remember them!

I think three very important keys are: use colour and weird images (the weirder, the better), use curved lines, not straight ones; put only one word or language chunk (e.g., phrasal verb) on a branch. Keep the mind map flexible as you would a pattern drill. Do not load up a branch with an entire phrase or sentence. That defeats the purpose of the mind map. 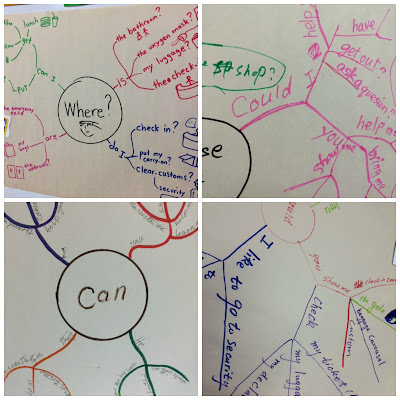 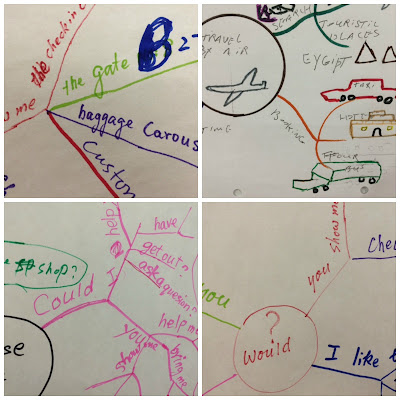 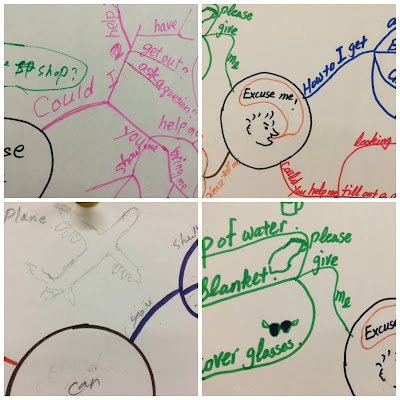 This week we learned how to describe food by packaging, by taste, smell, and texture. I brought in four foods that you tasted and described: dark chocolate, wasabi flavoured roasted seaweed snack, Garam Masala snack, and a breakfast cereal. We used words such as "creamy, tart, crunchy, crisp, umami, bittersweet," and "spicy."

By the end of the week, we were able to describe a food from back home to a classmate from another culture. SaiYing shared about glutinous rice balls filled with bean paste. Tareq shared about Pacha, while Nabil told us about a traditional Iraqi way of cooking fish near an open fire. I told you about Fiddlehead season in Canada.

Do you need to review food vocabulary? Go here:

By the time we finish this module, you might not find this quiz too difficult.
This adjective - noun matching quiz is hard today, but should get easier by Friday.

This past week we learned new terms and expressions we can use while shopping for clothes.

Practice listening to and pronouncing these words for patterns and materials. When you finish listening, there are quizzes you can take and games to play.

Here is some vocabulary you may find useful and a dialogue to practice. Remember how to do a pattern drill? Repeat your part of the dialogue over and over using different vocabulary in the blank each time.
Posted by Kelly at 1:10 PM No comments:

Two events of interest to us this weekend are:

The city's annual plant sale at Lansperry Park on Saturday from 8:00 a.m. to 2:00 p.m.  They will have some amazing prices. I plan to be in line early!

The other event is a "Jane's Walk" that will meet at 1:00 at Festival Plaza on the riverfront to begin a guided walk for one hour. You may learn some new things about the buildings and history of that area.  This will be a leisurely walk with opportunities to stop and rest periodically.

If you would like to work on the GSL, you can use Quizlet. There are 50-word blocks you can work on.

This week we are getting to know our Language Companion binders, writing our stories, talking about goals for English, and doing a needs assessment. We are between topics.

Needs assessments are not new to you. We've been doing those since I first became your teacher. You know what? It's not easy for a teacher to come up with interesting modules week after week when the makeup of the class doesn't change! Some of us have been together for four years now, I think! Other teachers can recycle old material every few months.

Anyway, while we figure out what we want to tackle next, I would like to address everyone's goal of mastering the English needed for everyday life in Canada. Have you ever heard of the General Service List?

That is a list of the 2,000 most common words used in English. If you can understand those, you are well on your way to understanding 90-95% of spoken English and about 85% of written English. So let's see how many of them you already know. I have an activity to help you learn a few of the ones you haven't already mastered.

Here is a new expanded GSL with frequency ranking numbers!
Posted by Kelly at 8:49 AM No comments:

This teacher was awarded: